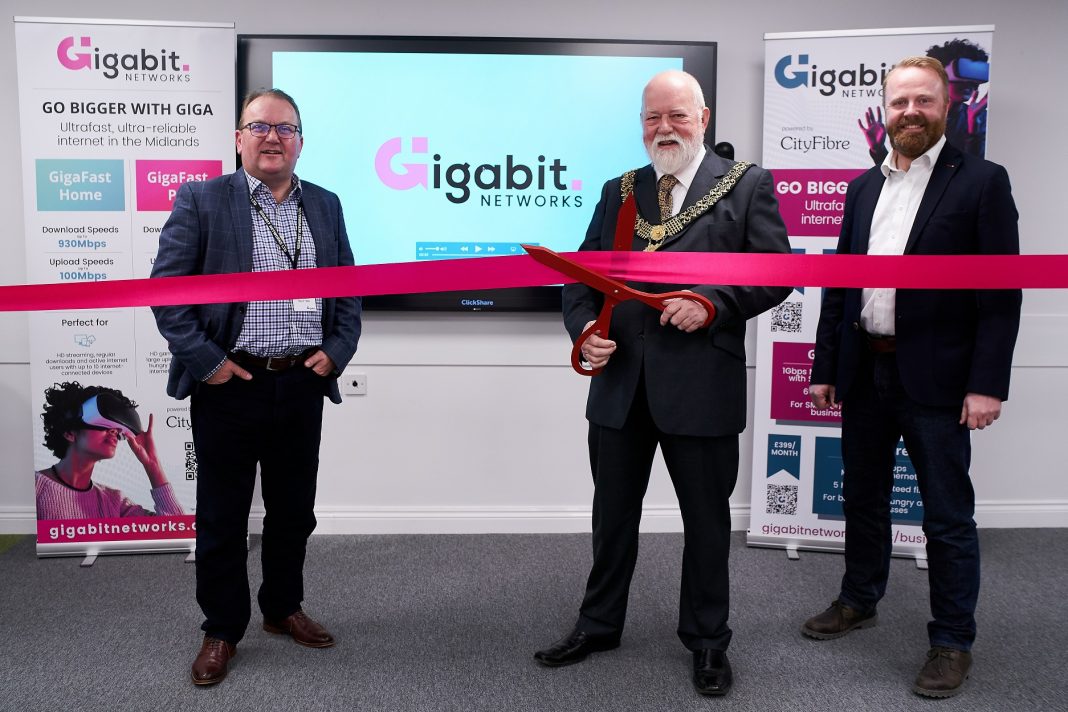 The ribbon has been cut and Derby has received a ‘once in a generation opportunity to prosper’ following the switch on of its new full-fibre internet network.

Internet supplier Gigabit Networks joined forces with Mayor of Derby, Councillor Robin Wood, to officially launch the service, which will give users near limitless bandwidth and greater download speeds.

Derby becomes the first city in the East Midlands (and among the first in the UK) to enjoy the benefits of full-fibre internet technology.

Gigabit Networks is working in partnership with CityFibre, which is installing the all-important cabling that will create a full fibre internet network beneath Derby’s streets as part of an initial £45 million private investment.

David Yates, co-founder of Gigabit Networks, said: “Full fibre is only available to around 20% of UK premises, which means that Derby is right at the very forefront of this technology and has a huge commercial advantage because of the internet speeds that are now at its companies’ finger-tips.”

Thousands of Derby homes and businesses will be able to access the full-fibre internet network, which offers download speeds of up to 930 Mbps, compared to the city’s current average internet speed of 65 Mbps.

This will enable subscribers to stream TV, take part in video conferencing or use cloud computing quicker and more reliably than at present.

The network uses 100% underground fibre optic cables, which transmit data quicker and more reliably than the traditional copper wire network and have so far been laid outside 8,000 homes and businesses in parts of Mackworth, Allestree, Mickleover, Abbey, Arboretum and Darley wards.

It will take until 2025 to install the entire digital infrastructure across Derby, offering full fibre broadband to virtually every home and business in the city.

CityFibre is laying more and more cable every day, but since it is the installer and not an internet service provider (ISP) itself, it does not connect individual properties to the network itself.

Instead, it is working in partnership with companies like Gigabit Networks.

The full fibre technology is being seen as a game-changer for Derby because its superfast speeds can give businesses a huge commercial advantage over competitors in other cities.

Dan Ilett, co-founder of Gigabit Networks, said: “Our recent experience of lockdown showed everybody how critical good connection speeds are and, with more and more data being shared and received across the internet each day, the need for a fast and reliable connection is only going to grow.

“Derby is now able to handle that growth thanks to its new network, meaning that this is a once-in-a-generation opportunity for the city to prosper while others are being left behind.

Speaking at the launch, just before he announced the service had gone live, Councillor Wood said: “I am proud to say that I am now one of the first people to be able to say that they are Mayor of a Gigabit City.

“That is very important, because Derby’s future plans rely on connectivity, so you are giving us exactly what Derby needs at the right time.”

It will take until 2025 to install the entire digital infrastructure across Derby.

Gigabit Networks is recruiting IT and Telco partners at the Leicester...

Construction work starts on i9 office development in Wolverhampton